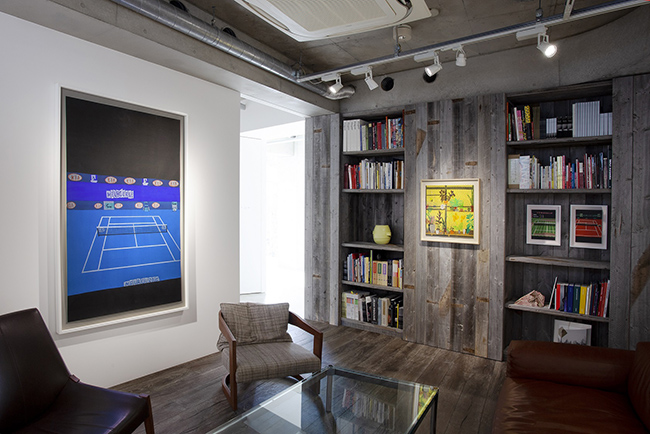 MASAHIRO MAKI GALLERY is pleased to present Jonas Wood & Shio Kusaka: Pots, Plants, Sports, a two-person exhibition which focuses on prints by the American painter, Jonas Wood, and his partner, the ceramic artist, Shio Kusaka, to be held for the first time in Japan.

Featuring themes that appear recurrently in their work, such as pots, plants and sports scenes, the exhibition covers two floors of the gallery space and showcases twenty prints by Wood, produced between 2011 and 2017, alongside a selection of ten prints by Kusaka which take her ceramic works as their subjects. In addition to the exhibition held at the gallery, thirty works by Wood will be on view at Art Fair Tokyo 2019, from March 7th through 10th. The prints in this exhibition form a series of vividly graphical images in which the sheer flatness of the surface and the use of the same plate with varying color schemes achievable solely through the medium of printing further enrich the diversity of lines, forms and colors that intersect and interrupt one another. The over sixty images displayed at two locations epitomize the colorful and playful body of work by the artist duo who stand at the forefront of contemporary American Pop Art.

Taking everyday motifs such as houseplants, tennis court, and interiors with figures of friends and family as his subjects, Wood captures them from multiple perspectives and weaves them together to present a flattened and disorientating vision of space, in which dissonant colors and complex compositions are at work. While often presenting his work according to thematic categories, such as ‘Portraits’ and ‘Interiors’, Wood has lately been developing imaginative compositions that cross over these categories and blend the two-dimensional and three-dimensional, such as basketballs stemming from plants or a pot whose surface is adorned with a landscape. The exploration of space and perspective in Wood’s paintings finds its art-historical lineage in Modern and post-Modern predecessors, such as Henri Matisse and David Hockney, as well as the increasingly evident influence of the ceramicist, Kusaka, with whom he shares a studio in Los Angeles. In recent years, Wood has been working closely on prints in addition to paintings, exploring various techniques such as screen-printing, lithography and etching. The resulting works are void of their painterly textures and the flatness of the image is further emphasized.

Kusaka’s ceramic pots are characterized by their organic forms of various sizes, their surfaces depicting hand-drawn motifs, such as fruits, dinosaurs, basketballs, grids and wood grain patterns. Beautifully exposing the imperfections, subtle distortions and discontinuities in their form and pattern, Kusaka’s delicate and expressive work blurs the boundary between drawing and pottery, figurative and abstract, revealing the artist’s innovative approach to establishing a new aesthetics beyond the traditions of craftsmanship and folk art. Kusaka’s prints, which take her ceramic works as their subjects, free her quirky pots from their tactility and material presence, instead transforming them into weightless graphics that float against Pop-inspired, square-shaped backgrounds saturated with monochromatic colors.