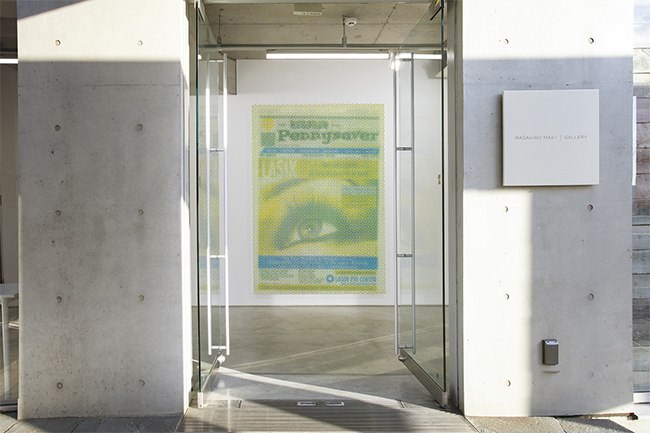 Masahiro Maki Gallery is pleased to announce ‘Rods and Cones’, the first solo exhibition in Japan by Los Angeles-based artist Mungo Thomson, known for a diverse body of work that challenges institutions and perceptions, and for an engagement with printed matter and the archive through film, sound and object-making.

The images in Rods and Cones originate in junk mail coupon circulars that Thomson receives unsolicited at his home: newsprint booklets full of promotions for everyday products and services, health and beauty treatments, and classified ads. Considered a nuisance and normally immediately recycled, Thomson has been collecting them for years. Many of the images in these mailers refer specifically to vision and optics (LASIK surgery, prescription glasses, optometry practices) but, being cheaply printed, are often hard to read. They are paradoxical vision tests: if you can’t read the ad, you need the service advertised, which you can’t read.

Rods and Cones transforms these optical ads into optical art, exploiting only properties already present in the junk mailer itself: CMYK half-tone printing. Thomson separates each image into cyan, magenta, yellow and black channels and explodes the size of the half-tone dot about 1,000 times a scale more familiar from outdoor billboards. The works in Rods and Cones are then manually produced in an elaborate, painted approximation of the four-color printing process, with each channel of transparent pigment put down layer by layer on a large panel. Where transparent colors overlap, secondary and tertiary colors appear, and the full spectrum forms. This “optical color mixing” occurs in the eye of the viewer.

The rods and cones in human eye are our ‘photoreceptors’ as many as 120 million rods in each retina perceive light, and up to 7 million cones in each retina perceive color. Through intense, vibratory immersion, Rods and Cones elicits an awareness of the visual field as an aggregate of millions of tiny, invisible parts that is absorbed and assembled by millions of cells into a coherent image in the brain.

Thomson’s Rods and Cones lies on a continuum with projects like his TIME mirrors (2012-ongoing) and “Untitled (TIME)” (2010), a video that assembles every cover of TIME magazine at 24 frames per second, which will be displayed during the exhibition.


【About the Artist】
Mungo Thomson is a Los Angeles-based artist born in California in 1969. In 2018, he held solo museum exhibitions at the Henry Art Gallery, Seattle, and the Museum of Fine Arts, Houston, and participated in group exhibitions at the Museum of Contemporary Art, Los Angeles; Museo Jumex, Mexico City; and the Hammer Museum, Los Angeles. Thomson has participated in the 2nd CAFAM Biennale, Beijing; the Pacific Standard Time Public Art and Performance Festival, Los Angeles; the 12th Istanbul Biennial; the 2008 Whitney Biennial; PERFORMA05, New York; and the Biennial of the Moving Image, MAMCO, Geneva, Switzerland. In 2013, he was included in the Yebisu International Festival for Art & Alternative Visions at the Tokyo Metropolitan Museum of Photography.